THE LOST BOOK OF ADANA MOREAU 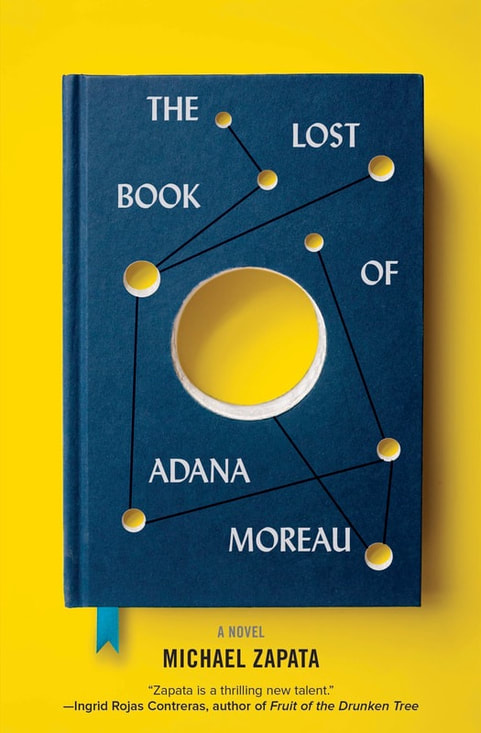 In 1929 in New Orleans, a Dominican immigrant named Adana Moreau writes a science fiction novel titled Lost City. It earns a modest but enthusiastic readership, and Adana begins a sequel. Then she falls gravely ill. Just before Adana dies, leaving behind her husband and son, she destroys the only copy of the manuscript.

Decades later in Chicago, Saul Drower's dying grandfather asks him to send a mysterious package to Adana Moreau's son, Maxwell, a theoretical physicist at the University of Chile. When the package is unexpectedly returned, Saul discovers that it contains a manuscript titled A Model Earth, written by none other than Adana Moreau.

Who was Adana Moreau? How did Saul’s grandfather, a Jewish immigrant born on a steamship, come across this  lost manuscript? With the help of his friend Javier, Saul tracks down an address for Maxwell in New Orleans, and, just as Hurricane Katrina strikes, the two head south to that storm-ravaged city hit search of answers.

What results is a brilliantly layered masterpiece. An ode to home, storytelling and the possibility of parallel worlds, Michael Zapata's debut shines a breathtaking new light on the experiences of displacement and exile that define our nation.

“Hypnotizing…Zapata reinterprets the extent and toll of exile on Earth, the gulf between universes of human experience.” — The New York Times Book Review

"Smart and heart-piercing, Lost Book is a story of displacement, erasure, identity, mythology, and the ability of literature to simultaneously express and transcend our lives — not to mention reality."  — NPR

“[An] expansive, big-hearted and time-hopping debut…[Zapata’s] sensibility is one of great love for human beings and for life itself.” — The Chicago Tribune

"Deftly conjured…thematically vital…Zapata’s carefully crafted prose oscillates between matter-of-fact and lyrically poetic...Ultimately, Zapata’s novel is about taking steps to create the world you wish to inhabit, whether through art or through the vital small deed of giving a wandering orphan a place to sleep.” — The Washington Post

"A mix of realist and speculative styles, this ambitious literary debut has earned Zapata comparisons to Jesmyn Ward."--Boston Globe

"The Lost Book zigzags through space and time, crafting a mythology and historical lineage so compelling it overshadows the original mystery. Readers of Gabriel García Márquez, Italo Calvino, and even Studs Terkel can all find something to love in Zapata’s detailed world-building and heart-stopping prose." — AV Club

"An absolutely stunning piece of work, and it is the best book so far you'll read this year."--Newcity Lit

“Rich in imagination, The Lost Book of Adana Moreau is a gorgeous, heartbreaking examination of exile, diaspora, and family that spans multiple narratives across space and time.” --Chicago Magazine

Ecuadorean American Michael Zapata's new The Lost Book of Adana Moreau is a 'love letter to the history of speculative fiction and science fiction' and is part of the growing Latinofuturism movement." –Axios

"[An] elegant and sweeping multigenerational, international story of lives marked by political violence and bound by the shared condition of exile." — Salon

"The book leaps gracefully between the 1920s, ’30s, and 2000s, weaving together a vast, multigenerational story that flows with the effortless grace of a Stevie Wonder track. Along the way, Zapata weaves in everything from pirates to alternate universes—not to mention spaceship cities! It’s such a complex narrative that it’s almost shocking how well everything hangs together. We can’t wait to read whatever comes next." — Apple Books Review

"As intriguing as the plot may sound upfront, it can’t speak to the otherworldly beauty of Michael Zapata’s writing. Don’t even bother trying to mark all the gorgeous passages that give you goosebumps, because there wouldn’t be much left unmarked... Zapata’s lyrical style has firm roots in Gabriel García Márquez’s work, with a boldness of delivery to the tune of Jorge Luis Borges...Zapata has treated us to a thrillingly mysterious storyline with a beautiful payoff."  — Book Page STARRED Review

“In a lyrical tale spanning a century and veering from the colonized Caribbean to revolutionary Russia, from mid-twentieth-century Chicago to Katrina-besieged New Orleans, Zapata spins an iridescent web of grief, loss, and memory...A lush, spellbinding tale.”  — Booklist STARRED Review

"An illuminating work on trauma and the transience of human existence... A heady literary and genre-bending novel for fans of Jorge Luis Borges, Carlos Fuentes, and Adolfo Bioy Caseres." — Library Journal STARRED review

“A luminous debut… a tribute to the power of storytelling and the way we cherish its gifts.”--NOLA.com

"This wonder of a novel speaks to the power of storytelling across generations." --LitHub

"A structurally bold, big-hearted novel about miracles both real and fictional." --Vol. 1 Brooklyn

"A globe-circling and generation-spanning debut that expands the notion of home and the meaning of storytelling... A masterfully written novel that finds worlds of possibility in the ways that books and history connect us all." --Chicago Review of Books

"Through litanies of the names of overlooked poets and science fiction writers of color, through multiple survival stories from New Orleanians in the aftermath of Hurricane Katrina, through deep and heartbreaking asides about Argentinian and Bolshevik revolutionaries, Zapata shows that the multiverses we crave are contained within each person, each event. Every new story we hear is a parallel universe in our own backyard, if only we cultivate the ability to listen." — Little Village

"I was enthralled by Maxwell's and Saul's fascination with infinite parallel dimensions, the science in which Maxwell specializes while a professor at a university in Chile. Combining this traditionally science-fiction idea with the contemporary notion of "history" propels the novel to untampered philosophical heights." — Jackson Free Press

The Lost Book of Adana Moreau is a thought-provoking literary mystery, and its title character a welcome addition to the canon of fictional science fiction writers." --Tor.com

“Cap­tures the feel­ing of drift­ing on an ocean of voic­es, pro­pelled by the desire to hear and hon­or each one.…Zapata’s trance-like sto­ry­telling real­ly does make one ques­tion if there could be par­al­lel worlds, and makes the read­er con­tem­plate these infi­nite pos­si­ble worlds.”--Jewish Book Council

"Sensational…weaves a modern tale of dispossession and imaginary books in the poetic language of dreams.. a masterpiece of imagination, poetic language, and serious commentary on the human condition. I highly recommend it."--Somos En Escrito

“Zapata's debut novel is a wonderful merging of adventure with thoughtful but urgent meditations on time, history, and surviving tragedy. The characters are richly drawn, and the prose is striking…. A luminous novel about the deep value of telling stories.”
--Kirkus Reviews

"[A] stirring debut...Digging into themes of regeneration and rejuvenation, Zapata's marriage of speculative and realist styles makes for a harrowing, immersive tale that will appeal to fans of Jesmyn Ward's Salvage the Bones."
--Publishers Weekly

“This bold, inventive debut moves through the twentieth century like a cyclone. The Lost Book of Adana Moreau opens with American Marines in Santo Domingo, tears on through New Orleans and reaches a roaring end in the Atacama Desert of Chile.  Michael Zapata writes as skillfully of rebellion as he does of joy and every page of The Lost Book of Adana Moreau comes alive.”
—Idra Novey, author of Ways to Disappear and Those Who Knew

“The Lost Book of Adana Moreau is a stunner—equal parts epic and intimate, thrilling and elegiac. As the novel bounds effortlessly through time, a powerful ode to the mysteries that echo across generations, the wonder of artistic creation, and the profound unknowability of what exactly constitutes 'reality' emerges. Michael Zapata’s inventive, twisty plot will keep you reading through the night, and his indelible characters will make a home in your heart.”
--Laura van den Berg, author of The Third Hotel

“In The Lost Book of Adana Moreau tales belie other tales in the timeless grace of One Thousand and One Nights—if One Thousand and One Nights was set in New Orleans and slipped, every once in a while, into science fiction. Zapata is a thrilling new talent. Alternating between the quest for a man in post-Katrina New Orleans for whom a mystery manuscript was left to be posthumously delivered, and the tale the manuscript itself tells, The Lost Book of Adana Moreau is an ambitious novel that probes for friendship, the possibility of parallel worlds, and the way the real and the unreal meet at every moment.”
—​Ingrid Rojas Contreras, author of Fruit of the Drunken Tree

“The Lost Book of Adana Moreau is a profound novel about the persistence of stories and the singular power that books can conjure. Zapata is a luminous writer—a rule-breaker in the best way, and a storyteller who weaves between eras and genres with fluidity and grace. I loved every page of this bold debut.”
—Matthew Sullivan, author of Midnight at the Bright Ideas Bookstore

“The Lost Book of Adana Moreau is a hypnotic, whirling meditation on displacement and exile. This is a novel that cherishes the bonds between people even when those bonds are seemingly severed by time and distance. Zapata is a brilliant new voice who controls impermanence, asymmetry, and possibility like a classical composer with perfect pitch.”
—Maurice Carlos Ruffin, author of We Cast a Shadow